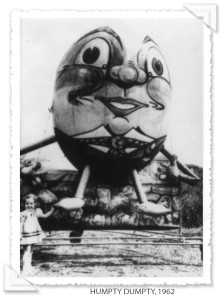 Dynamic Displays has come a long way since 1962.

I remember the days of typewriter tape and carbon paper—not necessarily with fondness, but certainly with some degree of nostalgia. Back then, the inflatable industry was just beginning to blossom, and Dynamic was not only riding on the cusp of progress, but was laying a lot of track too.

Acknowledged as the inventor of the cold-air inflatable, Jim Thomson was the first man to put a fan to fabric, eliminating many of the problems associated with the original heavy rubber balloons produced by companies such as Goodyear. Always a man excited by the promise of potential, Jim began Dynamic Displays literally in his backyard. He and his team contributed hugely to the development and refinement of Inflatable Costumes, Floats and the popular Helium Giant.

Where are we now? The industry has grown as large as its towering mascots, and parades are big business. We’re still dedicated to innovation, and still defining what quality looks like.

So here’s to progress—America, we’ll see you on Thanksgiving.