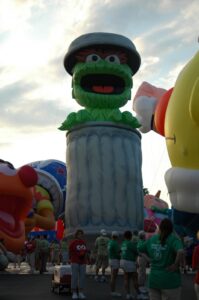 Parades are such exciting events. Throngs of people suddenly turn up on the downtown city streets, toting lawn chairs and small children, all anticipating the same thing–the magic and excitement of the parade experience.

You can feel the anticipation in the morning air as step-off approaches… the floats are lining up, the bands tuning up, and somewhere around the block, the balloons are being let loose to rise slowly in preparation for flight.

I think the thing I like most about parades (aside from the giant balloons, of course), is the way all parade participants give themselves over to the fun with such wild abandon. Where else would you see grown men proudly sporting a multi-colored wig and a full face of paint? They’re having such a grand old time, too. Events like America’s parades give everyone the chance to be a kid again, to gasp in awe at the giant helium balloons soaring through the streets and to shout with amazement at that particularly amazing float. And that’s just the crowd–parade participants get to play dress up, ham it up for their watching friends and family, and march with pride through the streets of the city they love.

We all need a chance to let loose once in a while, and I’d say that parade day is a great chance to do just that.

Coming to your hometown this Thanksgiving, Dynamic Displays’ cast of giant parade balloons will help usher in the holiday season. Watch for us.