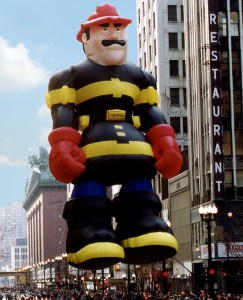 It’s that time of year again—we’re a month away from Thanksgiving, and parade and event coordinators everywhere are starting to remember the pressure from last year. Thanksgiving Day is the single most popular day for parades in the States, as many of America’s cities seek to usher in the holiday season with some degree of fanfare and celebration.

Probably the most famous Thanksgiving Parade in America is the Macy’s Parade in New York City, also one of the first parades to use giant helium balloons as part of the celebratory procession. In addition to New York, nearly every other large city across the country throws their own Thanksgiving Parade. Millions of people line their city streets annually, braving somewhat unpredictable weather to participate is what is now a firm American tradition—the holiday parade.

Dynamic Displays’ stock of rental balloons can be seen in a number of Thanksgiving Day parades across the country, including Houston’s HEB Holiday Parade, Chicago’s State Street Thanksgiving Parade, and others. Some of our more popular choices include Jim Henson’s famous muppets, Kermit the Frog and Miss Piggy, as well as a variety of Sesame Street’s lovable characters, such as Elmo, Big Bird and Cookie Monster.

The Birth of An Industry: Giant Inflatables Take to the Sky