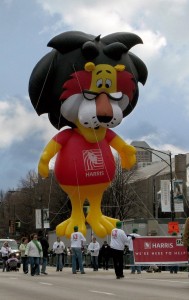 Brand reinforcement is an important part of advertising in today’s over-saturated marketing arena.

Harris Bank took some big steps to promote their brand with a 30-foot replica of their company mascot—Hubert the Lion.